The group feature allows you to segregate your community into subsets based on the members’ interests, location, or any other criterion, and target specific members when posting content.

As an admin, you can always view all the groups in your app by visiting the “Home” tab. The default group “Everybody” encompasses all the users in your app. That’s the group you want to select when you need to broadcast important announcements to everyone. 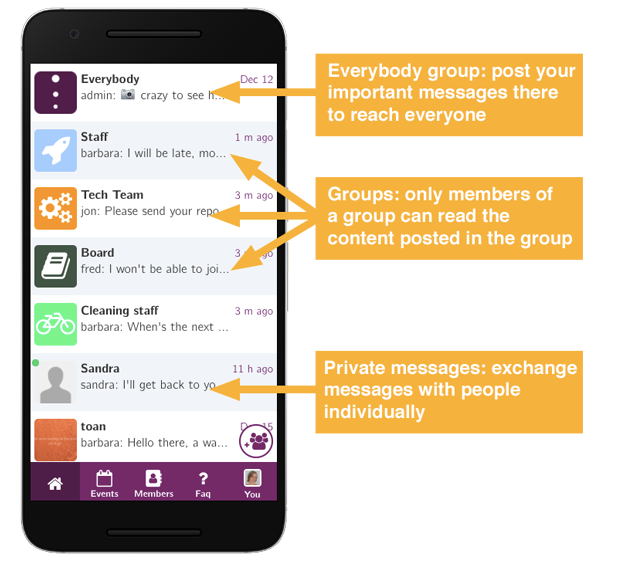 Who can create groups

While setting up your app, you’ll have to decide who can create groups. You can make it so that only admins are allowed to create new groups or let everyone do it.

When a user creates a group she can choose whether the group should be visible or invisible.

Users cannot see invisible groups unless they are part of them. It means they cannot view these groups, nor their content or members.

For instance, imagine that Yann creates a “FUSSBALL FANS” invisible group and adds Jon and Jennifer to his group. Barbara, who is not part of the group, is not able to view the group, its members, or any content they post in “FUSSBALL FANS”. She basically doesn’t even know that the group exists.

Note: an admin however can always see the list of all invisible groups, even if she’s not part of them.

A visible group is visible by all users, listed in their “Home” tab. Any user can see that the visible group exists, and which members are part of it, even if she’s not part of it herself. However, she cannot see the content posted in the group unless she’s part of it. If the user sees a group that looks interesting, she can click on a button to ask the group owner to let her join the group. In that case, the group owner receives an email asking to accept or reject the request. The group’s content remains invisible to the user until the group owner grants her access.

Let’s take another example. Barbara creates a “Yoga” visible group and adds Jennifer to her group. Jon, who is not part of the group, can still see that the group exists: it is listed in his “Home” tab. He can also see who is in the group: Barbara and Jennifer. Finally, if he tries to click on the group to access the content, his access is denied, but a “Ask to join” button is displayed to allow Jon to request access. If he clicks on the button, Barbara is notified by email. She can then grant or deny access to him.

It is possible to configure the app so that joining a visible group is only a click away: no approval from the group owner is required. This feature is global across all visible groups: you decide if you want to enable it when the app is created and all visible groups are impacted by it.

Groups are really powerful and can be configured according to the needs of each community. You can learn how to create, edit or delete a group here.

If you have feedback or questions, just get in touch with us or post a comment below!